Renovated to Death (A Domestic Partners in Crime Mystery #1) (Paperback) 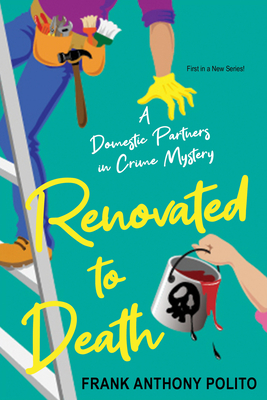 After a successful first season of Domestic Partners chronicling the renovation of their historic Craftsman Colonial, Peter and JP are taking on a renovation of a local Tudor Revival inherited by identical twin brothers Terry and Tom Cash. But linoleum floors and a pink-tiled bathroom aren’t the only unwelcome surprises awaiting inside the house…

Just as the show is set to start filming, Peter and JP discover Tom Cash dead at the foot of the house’s staircase. And when the police ruling changes from accidental death to homicide, the list of suspects grows fast. Could the killer be the crabby next-door-neighbor, the Realtor ex-boyfriend, the bartender ex-boyfriend, the other, much younger, ex-boyfriend, or even renovation-reluctant brother, Terry? And what’s that awful smell coming from the basement? Now Peter’s mystery writer skills, and JP’s experience as the former star of a cop show, will be put to the test—as will their relationship while they uncover the secrets of the house and its owners. With a killer on the loose, this is one fixer upper that may prove deadly…

Frank Anthony Polito is an award‑winning author and playwright. His novels include the Lambda Award-winning Drama Queers!, Lost in the ‘90s, The Spirit of Detroit, and Band Fags!, among many others, and his plays have been produced around the country. He holds an MFA in Dramatic Writing from Carnegie Mellon and a BFA in Theatre from Wayne State. After growing up in the Detroit suburbs, Polito lived in New York City for 18 years before moving to Pleasant Ridge, Michigan with his partner Craig Bentley and their two dogs.  They live in a 1924 Craftsman Colonial that they purchased on HGTV’s House Hunters and have been renovating together since 2013. He can be found online at facebook.com/frankanthonypolito.