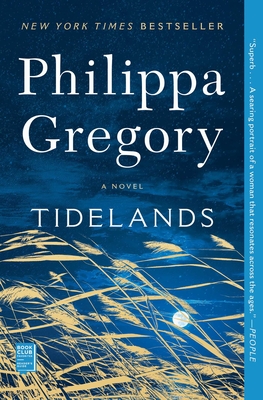 This is book number 1 in the The Fairmile Series series.

“Philippa Gregory never fails to create beautifully written stories that suck you in and transport you back to the time and place the book is set. As always, her latest novel, Tidelands, is obviously thoroughly researched, with many historical facts sprinkled throughout. I highly recommend this book for fans of historical fiction.”
— Lisa Smegal, Rivendell Bookstore, Abilene, KS

“In Phillipa Gregory’s new series, she leaves the intrigue and glamor of the royal court for the grit and struggle of an impoverished fishing village off the southern coast of England. Parliamentarians clash with Royalists, and Papists secret away from their Puritan neighbors in this 17th-century Thorn Birds-esque tale of struggle, caste systems, forbidden love, secrets, superstition, temptation, and infidelity. In a small fishing village where anything can be blamed on the evils of women, gossip rules, gossip destroys, and anyone can be suspected of witchcraft. Gregory never fails to breathe new life into forgotten histories!”
— Kathy Blattman, The Well-Read Moose, Coeur d'Alene, ID

This New York Times bestseller from “one of the great storytellers of our time” (San Francisco Book Review) turns from the glamour of the royal courts to tell the story of an ordinary woman, Alinor, living in a dangerous time for a woman to be different.

On Midsummer’s Eve, Alinor waits in the church graveyard, hoping to encounter the ghost of her missing husband and thus confirm his death. Until she can, she is neither maiden nor wife nor widow, living in a perilous limbo. Instead she meets James, a young man on the run. She shows him the secret ways across the treacherous marshy landscape of the Tidelands, not knowing she is leading a spy and an enemy into her life.

England is in the grip of a bloody civil war that reaches into the most remote parts of the kingdom. Alinor’s suspicious neighbors are watching each other for any sign that someone might be disloyal to the new parliament, and Alinor’s ambition and determination mark her as a woman who doesn’t follow the rules. They have always whispered about the sinister power of Alinor’s beauty, but the secrets they don’t know about her and James are far more damning. This is the time of witch-mania, and if the villagers discover the truth, they could take matters into their own hands.

“This is Gregory par excellence” (Kirkus Reviews). “Fans of Gregory’s works and of historicals in general will delight in this page-turning tale” (Library Journal, starred review) that is “superb… A searing portrait of a woman that resonates across the ages” (People).

“Superb. . . A searing portrait of a woman that resonates across the ages.”
— People

“This is Gregory par excellence. A promising start to a family saga about ordinary people.”
— Kirkus Reviews

"As with all good historical fiction, the novel offers that uncanny combination of distancing detail and themes that feel only too close to us today....Tidelands is a spellbinding read and an evocative glimpse at our strangely familiar past."
— Independent (UK)

“Richly detailed and brimming with secrets (personal and political), Tidelands is a captivating portrait of a brave woman and a compelling start to a new series.”
— Shelf Awareness

"The author crafts her material with effortless ease. Her grasp of social mores is brilliant, the love story rings true and the research is, as ever, of the highest calibre."
— Daily Mail (UK)

"I adore the way Philippa Gregory tells a story. I especially love how she brings to life female characters and makes them queens in their own right, even if they are mere herbalists....What Gregory does so wonderfully, though, is make you see how unjust the world can be, especially for women of a particular time period."
— Bookreporter