We Are All Good People Here (Compact Disc) 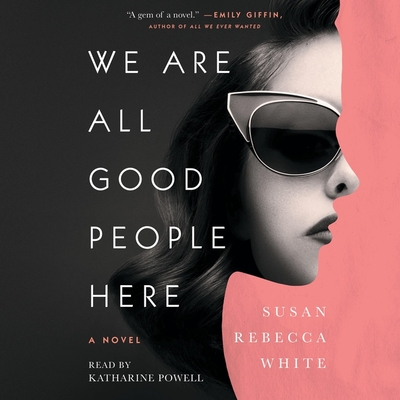 By Susan Rebecca White, Katharine Powell (Read by)
$39.99
Not available

“I’ve been reading and admiring Susan Rebecca White’s novels since her 2009 debut, Bound South, and her new book is a continuation of her unmatched knack for capturing the essence of her Atlanta upbringing. Adding layers of historical context to the familiar world of her previous works, White tells a moving and thought-provoking story that spans the tumultuous final decades of the American Century. She explores race, class, privilege, and politics through a cast of very human characters ranging across the entire socioeconomic and ideological spectrum. The book bears witness to the evolution in conscience of these times as the reader experiences the evolution of this ambitious, talented writer.”
— Frank Reiss, A Cappella Books, Atlanta, GA

From the author of A Place at the Table and A Soft Place to Land, a gripping, multigenerational story inspired by true events that follows two best friends through their political awakenings in the turbulent 1960s--and the repercussions of their actions after their daughters encounter the secrets they thought they had buried long ago.Eve Whalen, privileged child of an old-money Atlanta family, meets Daniella Gold in the fall of 1962, on their first day at Belmont College. Paired as roommates, the two become fast friends. Daniella, raised in Georgetown by a Jewish father and a Methodist mother, has always felt caught between two worlds. But at Belmont, her bond with Eve allows her to finally experience a sense of belonging. That is, until the girls' expanding awareness of the South's caste system forces them to question everything they thought they knew about the world and their places in it. Eve veers toward radicalism--a choice pragmatic Daniella cannot fathom. After a tragedy, Eve returns to Daniella for help in beginning anew, hoping to shed her past. But the past isn't so easily buried, as Daniella and Eve discover when their daughters are caught up in secrets meant to stay hidden. Spanning just over thirty years of American history, from the twilight of Kennedy's Camelot to the beginning of Bill Clinton's presidency, We Are All Good People Here perfectly resonates with today's fraught American political zeitgeist and asks us: why do good intentions too often lead to tragic outcomes? Can we separate our political choices and our personal morals? And is it possible to truly bury our former selves and escape our own history?