Roar of the Sea: Treachery, Obsession, and Alaska's Most Valuable Wildlife (Paperback) 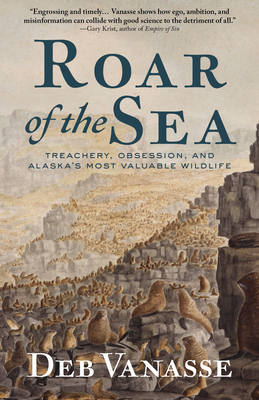 A swashbuckling narrative of treachery and obsession involving pirates, fur seals, competing governments, and near war.

"In Roar of the Sea, Deb Vanasse] writes with verve and dramatic impact, reconstructing the narrative of Elliott's tenacious crusade in a way that will transport the reader back to the cacophonous seal rookeries, to the bloody, blubber-slicked decks of the sealing ships, and to the elegant meeting rooms of the nation's capital. While bringing deserved attention to Elliott for his wildlife conservation work in the late 19th and early 20th centuries, Vanasse ends with a sobering challenge: those seal rookeries on the Pribilof Islands are now facing new human-caused threats--and could use 21st century advocates."
--The Daily Astorian/Coast Weekend

"Now comes a fascinating, full history of the fur seal story, pitting artist and advocate Henry Wood Elliott against the most famous of the seal pirates, a man named Alex MacLean, and a whole host of ill-informed and corrupt business and political titans. Deb Vanasse, a former Alaskan who now lives in Oregon and is the author of many previous books--including Wealth Woman, about the Klondike gold rush--has done extensive research to illuminate the historical characters, the difficulties of reaching an international agreement to protect wildlife, and the significance of that treaty today."
--Anchorage Daily News

Over a century ago, treachery in Alaska's Bering Sea twice brought the world to the brink of war. The US seized Canadian vessels, Great Britain positioned warships to strike the US, and Americans killed Japanese pirates on US soil--all because of the northern fur seals crowded together on the tiny Pribilof Islands.

The herd's population plummeted from 4.7 million to 940,000 in the span of eight years while notorious seafarers like Alex MacLean (who inspired Jack London's The Sea-Wolf) poached indiscriminately. Enter an unlikely crusader to defend the seals: self-taught artist and naturalist Henry Wood Elliott, whose zeal and love for the animals inspired him to go against all odds and take on titans of the sea.

Winning seemed impossible, and yet Elliott managed to expose corruption and set the course for modern wildlife protections that are all the more relevant today as the world grapples with mass extinction.

Carefully written and researched, Roar of the Sea reveals the incredible hidden history of how one lone activist existing in the margins prevailed against national governments and corporate interests in the name of wildlife conservation.