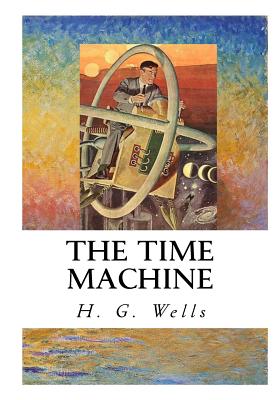 The Time Machine by H. G. Wells The Time Machine is a science fiction novel by H. G. Wells, published in 1895. Wells is generally credited with the popularization of the concept of time travel by using a vehicle that allows an operator to travel purposely and selectively forwards or backwards in time. The term "time machine," coined by Wells, is now almost universally used to refer to such a vehicle The Time Machine has since been adapted into three feature films of the same name, as well as two television versions, and a large number of comic book adaptations. It has also indirectly inspired many more works of fiction in many media. The book's protagonist is an English scientist and gentleman inventor living in Richmond, Surrey, in Victorian England, and identified by a narrator simply as the Time Traveller. The narrator recounts the Traveller's lecture to his weekly dinner guests that time is simply a fourth dimension, and his demonstration of a tabletop model machine for travelling through it. He reveals that he has built a machine capable of carrying a person through time, and returns at dinner the following week to recount a remarkable tale, becoming the new narrator. In the new narrative, the Time Traveller tests his device with a journey that takes him to A.D. 802,701, where he meets the Eloi, a society of small, elegant, childlike adults. They live in small communities within large and futuristic yet slowly deteriorating buildings, doing no work and having a frugivorous diet. His efforts to communicate with them are hampered by their lack of curiosity or discipline, and he speculates that they are a peaceful, communist society, the result of humanity conquering nature with technology, and subsequently evolving to adapt to an environment in which strength and intellect are no longer advantageous to survival.