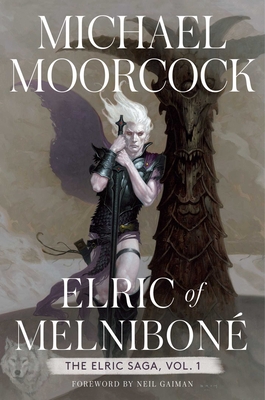 This is book number 1 in the Elric Saga, The series.

In one of the most well-known and well-loved fantasy epics of the 20th century, Elric is the brooding, albino emperor of the dying Kingdom of Melnibone. With Melnibone’s years of grandeur and decadence long since passed, Elric’s amoral cousin Yrkoon sets his eyes on the throne. Elric, realizing he is his country’s best hope, must face his nefarious cousin in an epic battle for the right to rule.

Elric of Melnibone is the first in Michael Moorcock’s incredible series, which created fantasy archetypes that have echoed through the genre for generations. The beautiful, vivid illustrations bring new life to the story and are sure to captivate fans, new and old.

Neil Gaiman is an award-winning author of books, graphic novels, short stories, and films for all ages. His titles include Norse Mythology, The Graveyard Book, Coraline, The View from the Cheap Seats, The Ocean at the End of the Lane, Neverwhere, and the Sandman series of graphic novels, among other works. His fiction has received Newbery, Carnegie, Hugo, Nebula, World Fantasy, and Eisner awards. The film adaptation of his short story “How to Talk to Girls at Parties” and the second season of the critically acclaimed, Emmy-nominated television adaptation of his novel American Gods will be released in 2018. Born in the UK, he now lives in the United States.