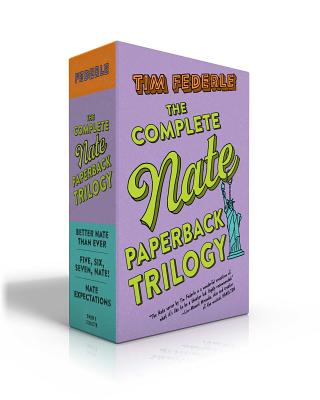 “The Nate series by Tim Federle is a wonderful evocation of what it’s like to be a theater kid. Highly recommended.” —Lin-Manuel Miranda, star and creator of the musical, Hamilton

A small-town boy hops a bus to New York City to pursue his musical theater dreams in this winning middle grade series that The New York Times called “inspired and inspiring.”

His whole life Nate has wanted to star in a Broadway show and, with his best friend’s help, he plans a daring escape to New York, where he auditions at the open casting call for E.T.: The Musical. What follows is the kind of adventure a small-town boy like Nate could only dream about; a story of taking chances, following your heart, growing into your own and, ultimately, coming home.

Tim Federle’s groundbreaking, Lambda Literary Award–winning series is a love letter to theater kids young and not-so-young—and for anyone who ever wondered if they could truly go home again. Especially when doing so means facing everything you thought you’d left behind.

Tim Federle is “a prolific scribe whose breezy wit isn’t bound to a single genre” (Huffington Post). Tim’s award-winning novels include The New York Times Notable Books The Great American Whatever and the Nate series—which Lin-Manuel Miranda called “a wonderful evocation of what it’s like to be a theater kid.” Tim cowrote both the Tony-nominated Broadway musical Tuck Everlasting, and the Golden Globe and Oscar–nominated Best Animated Feature Ferdinand, starring John Cena and Kate McKinnon. A native of San Francisco who grew up in Pittsburgh, Tim now divides his time between New York and the internet (@TimFederle).