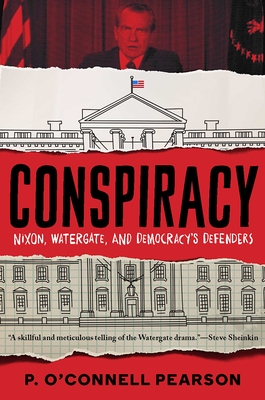 The story of President Richard Nixon and those who fought against him comes to life in this insightful and accessible nonfiction middle grade book from the author of Fly Girls and Fighting for the Forest.

The Watergate scandal created one of the greatest constitutional crises in American history. When the House Judiciary Committee approved three articles of impeachment against President Richard Nixon and the Supreme Court ruled that he had to turn over to Congress the tapes that proved the claims against him, he realized his support in the Senate had collapsed. He resigned rather than face almost certain conviction on abuse of power and obstruction of justice.

We know the villain’s story well, but what about the heroes? When the country’s own leader turned his back on the Constitution, who was there to defend it?

Conspiracy is about the reporters, prosecutors, judges, justices, members of Congress, and members of the public who supported and defended the Constitution when it needed it most.

P. O’Connell Pearson has always taught history—first in the high school classroom and then as a curriculum writer and editor across grade levels. Ready to share her enthusiasm for stories of the past in a new way, she earned an MFA in writing for young people from Lesley University and now writes narrative nonfiction for ages ten and up. Her books have received recognition from Bank Street, NCSS, the New-York Historical Society, Arizona Library Association, and more. When Pearson is not writing about history, she can often be found talking about history as a volunteer with the National Park Service in Washington, DC.

"An indisputably timely account of the last time an American president thought the Constitution didn’t apply to him. Smooth, clear writing makes this an appealing and accessible read. A cautionary episode from a half-century ago that ends up sounding eerily relevant."
— Kirkus Reviews