So Here's the Thing . . .: Notes on Growing Up, Getting Older, and Trusting Your Gut (Hardcover) 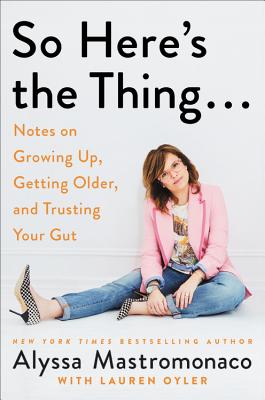 By Alyssa Mastromonaco, Lauren Oyler (With)
$27.00
On Our Shelves Now

Just as witty and insightful as her first book, So Here's the Thing is a humorous collection of advice and stories about before, during, and after Alyssa Mastromonaco's time working in the Obama White House. Like with her first book, Who Thought This Was A Good Idea, I cannot recommend this book enough.

From the New York Times bestselling author of Who Thought This Was a Good Idea? comes a fun, frank book of reflections, essays, and interviews on topics important to young women, ranging from politics and career to motherhood, sisterhood, and making and sustaining relationships of all kinds in the age of social media.
p.p1 {margin: 0.0px 0.0px 0.0px 0.0px; font: 12.0px Helvetica} p.p2 {margin: 0.0px 0.0px 0.0px 0.0px; font: 12.0px Helvetica; min-height: 14.0px}
Alyssa Mastromonaco is back with a bold, no-nonsense, and no-holds-barred twenty-first-century girl's guide to life, tackling the highs and lows of bodies, politics, relationships, moms, education, life on the internet, and pop culture. Whether discussing Barbra Streisand or The Bachelor, working in the West Wing or working on finding a wing woman, Alyssa leaves no stone unturned...and no awkward situation unexamined.
Like her bestseller Who Thought This Was a Good Idea?, SO HERE'S THE THING... brings a sharp eye and outsize sense of humor to the myriad issues facing women the world over, both in and out of the workplace. Along with Alyssa's personal experiences and hard-won life lessons, interviews with women like Monica Lewinsky, Susan Rice, and Chelsea Handler round out this modern woman's guide to, well, just about everything you can think of.

"Reading So Here's the Thing... is exactly like hanging out with Alyssa. You will laugh a lot, learn even more, and just be grateful that she is your friend."—Dan Pfeiffer, #1 New York Times bestselling author of Yes We (Still) Can and cohost of Pod Save America

"My favorite thing about Alyssa's books is knowing someone as normal as the rest of us can work in the most prestigious positions in the world and do it with a sense of humor and self-deprecation. We could all do with more of both. Read it, and laugh."—Chelsea Handler, #1 New York Times bestselling author of Are You There, Vodka? It's Me, Chelsea

"Growing up is hard. Trusting your gut? Sheesh. That sounds impossible at times. Let Alyssa Mastromonaco hold your hand and show you that with some good laughs and a lot of heart, life can be a little less daunting. I wish I'd read this book when I was younger, but it still resonates today, and I know it will be relevant at all stages of life. What a gift."—Aminatou Sow, co-founder of Tech LadyMafia

"I'm just going to say this book lets the 'cat out of the bag,' so to speak: everyone who knows her or reads her work wants to be Alyssa's best friend. SO HERE'S THE THING... makes it impossible not to want that. Her life stories somehow make all of us feel seen. All of which means my position on the waiting list for the best friend title may shift. While I'm coming to terms with that, I will also say I'm all for mixing patterns, just not always the ones Alyssa puts together."—Stacy London, New York Times bestselling author of The Truth About Style

"[So Here's The Thing...] is a delightful, digestible nosh of useful tips from Mastromonaco's long career in politics."—Portland Mercury

"Behind-the-scenes moments from [Mastromonaco's] career provide insights into the hectic work of campaigns and the White House...readers will enjoy the relaxed tone that Mastromonaco and coauthor Oyler set throughout -- like chatting with old friend, who just happened to have Mindy Kaling set up her Twitter account."—Booklist

PREVIOUS PRAISE FOR WHO THOUGHT THIS WAS A GOOD IDEA? AND ALYSSA MASTROMONACO:
"Always fascinating and very funny, Alyssa's book is full of juicy stories from one of the world's most glamorous jobs."
—Mindy Kaling, New York Times bestselling author of Is Everyone Hanging Out Without Me? (And Other Concerns) and Why Not Me?

"WHO THOUGHT THIS WAS A GOOD IDEA? is everything we've come to know and love about Alyssa over the decade we worked with her: brilliant, funny, grounded, and inspiring. Anyone who's interested in politics - especially young people - should read this book."—Dan Pfeiffer and Jon Favreau, former communications director and speechwriter for President Barack Obama

"Few people have had as much access and influence over national events over the last decade as Alyssa Mastromonaco. No matter how serious the crisis or hard the problem, Alyssa took care of it with great skill and professionalism, and even greater humor. This book tells the story of a young woman succeeding under extraordinary circumstances, and throughout it all, never taking herself too seriously."—Stephanie Cutter, former deputy campaign manager for President Barack Obama

"I've often wondered how a woman can be so many things wrapped up in one dynamic package. Alyssa is my fairy godmother: she's wise, resourceful, insanely smart, and makes me laugh in a very special way. Her stories - from the front line of the White House to her kitchen - will entertain, inspire, and humor you for a long time to come."—Amanda de Cadenet

"Alyssa is a force: whip-smart, humble, and funny as hell. Her writing is as fearless as she is."—Sophia Amoruso, founder and CEO of Girlboss

"When imagining working in the White House, many picture meaningful meetings, glamorous dinners, and high-stakes decision making. It can be all of those things. But as Alyssa Mastromonaco writes in WHO THOUGHT THIS WAS A GOOD IDEA?, the reader gets a real and raw peek behind the curtains where Alyssa experiences the good, the bad, the distressing, and the often hilarious. Alyssa has real grit and grace, and her book is her story very well told."—Dana Perino, New York Times bestselling author of And the Good News Is... and Let Me Tell You About Jasper...

"A combination memoir and compendium of very good suggestions about how to get ahead -- very far ahead -- at an early age."—The Washington Post