For Profit: A History of Corporations (Hardcover) 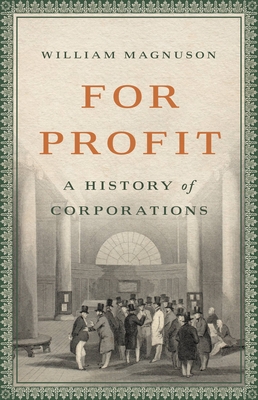 A history of how corporate innovation has shaped society, from ancient Rome to Silicon Valley

From legacy manufacturers to emerging tech giants, corporations wield significant power over our lives, our economy, and our politics. Some celebrate them as engines of progress and prosperity. Others argue that they recklessly pursue profit at the expense of us all.

In For Profit, law professor William Magnuson reveals that both visions contain an element of truth. The story of the corporation is a human story, about a diverse group of merchants, bankers, and investors that have over time come to shape the landscape of our modern economy.  Its central characters include both the brave, powerful, and ingenious and the conniving, fraudulent, and vicious. At times, these characters have been one and the same.

Yet as Magnuson shows, while corporations haven’t always behaved admirably, their purpose is a noble one. From their beginnings in the Roman Republic, corporations have been designed to promote the common good. By recapturing this spirit of civic virtue, For Profit argues, corporations can help craft a society in which all of us—not just shareholders—benefit from the profits of enterprise.

William Magnuson is an associate professor at Texas A&M Law School, where he teaches corporate law. Previously, he taught law at Harvard University. The author of Blockchain Democracy, he has written for the Wall Street Journal, Washington Post, Los Angeles Times, and Bloomberg. He lives in Austin, Texas.

“Magnuson eloquently explains how issues such as principal-agent problems, competition law and environmental and labour rights have cropped up throughout history.”—The Economist

"A comprehensive and lively account of eight corporations that have changed the world...A valuable, discerning assessment of these enormously influential societal actors--and a clear set of recommendations to make them serve the good."

“… I can pay Magnuson no higher compliment than to say that For Profit is a book I would be proud to have written.”
—Martin Vander Weyer, The Spectator (UK)

“Brilliantly conceived and enlightening at every turn, For Profit is a thrilling history of an institution that has shaped all our lives—for better and for worse.”—Lawrence Wright, author of The Plague Year

“In this lively and informative history of the corporation, William Magnuson shows that corporations were born to serve the public interest—only to be used and abused time and again to maximize profits for shareholders and executives. A must-read for any student of the world’s most influential form of economic organization.”—Adam Winkler, author of We the Corporations