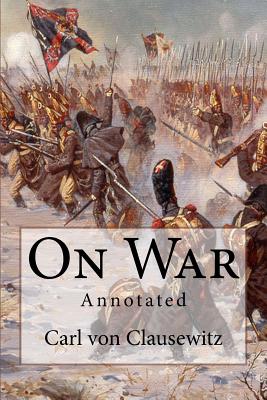 On War (Vom Kriege in german) is a book on war and military strategy by Prussian general Carl von Clausewitz (1780-1831), written mostly after the Napoleonic wars, between 1816 and 1830, and published posthumously by his wife in 1832.His 10-volume collected works contain most of his larger historical and theoretical writings, though not his shorter articles and papers or his extensive correspondence with important political, military, intellectual and cultural leaders in the Prussian state. On War is formed by the first three volumes and represents his theoretical explorations. It is one of the most important treatises on political-military analysis and strategy ever written, and remains both controversial and an influence on strategic thinking.Carl von Clausewitz's On War has been called, "not simply the greatest, but the only truly great book on war." It is an extraordinary attempt to construct an all-embracing theory of how war works. Its coherence and ambition are unmatched by other military literature. On War is full of sharp observation, biting irony, and memorable phrases, the most famous being, "War is a continuation of politics by other means."The book contains a wealth of historical examples used to illustrate its various concepts. Frederick II of Prussia (the Great) figures prominently for having made very efficient use of the limited forces at his disposal, though Napoleon is perhaps the central figure.Except for a brief stint in 1812 when he served in the Russian army, Clausewitz spent his whole career, from the age of twelve until his death in 1831, in the Prussian army. He fought in all the major Prussian campaigns against France, and his most fateful experience - the 1806 Battle of Jena-Auerstedt, in which Napoleon destroyed the Prussian army - inspired him to write On War.