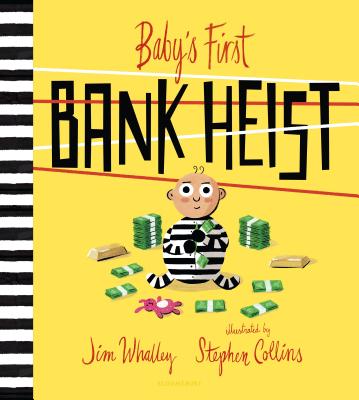 By Jim Whalley, Stephen Collins (Illustrator)
$17.99
On Our Shelves Now

Meet Baby Frank, the world's most unlikely criminal, as he masterminds his very own bank heist. Perfect for fans of Boss Baby.

Move over, Bonnie and Clyde, because there's a new criminal mastermind in town . . . Baby Frank!

He's the world's most unlikely criminal, but he's about to pull off the most daring baby bank heist ever.

Why? To get money for a fluffy new pet, of course.

This baby is dangerously cute and desperate for a pet. You have been warned . . .

STEPHEN COLLINS was born in 1980 and grew up in Penge, South London. He began cartooning for The Times in 2003, and has since won several awards, including the Jonathan Cape/Observer Graphic Short Story Prize 2010. His work has appeared in many publications worldwide, and he contributes regular comics to The Guardian Weekend and Prospect magazine. The Gigantic Beard That Was Evil is his debut graphic novel. He lives near Hertford with his wife.

“A colorful, slyly skewed world . . . and Frank's youthful resourcefulness and deeply appealing, googly eyed 'who, me?' look are enough to suggest that he isn't truly a bad seed.” —Publishers Weekly

“Dark and hilarious. . . . Collins' pictures . . . are a smooth jazzy tribute to mid-century chic, and there's a big payday for kids who scan the background details carefully.” —BCCB

"Whalley’s jaunty verse is a delight to read aloud, and the deadpan tone is deftly fleshed out by Collins’s playful gouache-and-ink cartoon illustrations. The lovable googly-eyed protagonist and a plethora of silly details will tickle sharp-eyed ­readers." - School Library Journal