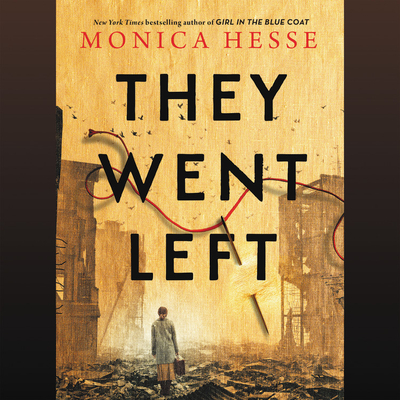 By Monica Hesse, Caitlin Davies (Read by)
Not currently available
Not Available

I listened to this title on Libro.fm, and it was absolutely amazing.  Of all the powerful and moving books about the Holocaust I've read, I don't think I've ever read one set in the first few weeks and months after the liberation of the concentration camps.  So often we read from the perspective of a Holocaust survivor who is years or even decades from the experience.  Living through the first few weeks of total uncertainty and lack of identity with the characters in this novel gave me a perspective I never had before.  As time moves forward, it becomes easier and easier to think of the Holocaust as an event that took place long ago, and for the very young in particular, it probably feels as if it were an experience limited to old people and grandparents.  After all, they have never experienced survivors in any other way.  This conveys the experience of encampment, survival and liberation through the eyes of a very young woman -- one who was forced to move from girl to woman inside a concentration camp. Seeing her released from a hospital soon after camp liberation and into a new and unrecognizable reality brings forth the humanity of the experience in a way I have never seen portrayed before.

A tour de force historical mystery from Monica Hesse, the bestselling and award-winning author of Girl in the Blue Coat.

Germany, 1945. The soldiers who liberated the Gross-Rosen concentration camp said the war was over, but nothing feels over to eighteen-year-old Zofia Lederman. Her body has barely begun to heal; her mind feels broken. And her life is completely shattered: Three years ago, she and her younger brother, Abek, were the only members of their family to be sent to the right, away from the gas chambers of Auschwitz-Birkenau. Everyone else--her parents, her grandmother, radiant Aunt Maja--they went left.

Zofia's last words to her brother were a promise: Abek to Zofia, A to Z. When I find you again, we will fill our alphabet. Now her journey to fulfill that vow takes her through Poland and Germany, and into a displaced persons camp where everyone she meets is trying to piece together a future from a painful past: Miriam, desperately searching for the twin she was separated from after they survived medical experimentation. Breine, a former heiress, who now longs only for a simple wedding with her new fianc . And Josef, who guards his past behind a wall of secrets, and is beautiful and strange and magnetic all at once.But the deeper Zofia digs, the more impossible her search seems. How can she find one boy in a sea of the missing? In the rubble of a broken continent, Zofia must delve into a mystery whose answers could break her--or help her rebuild her world.