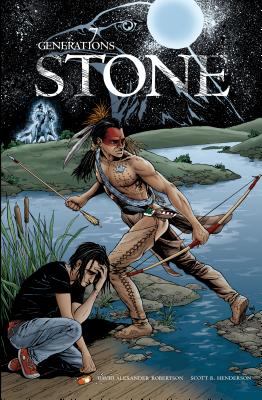 By David A. Robertson, Scott B. Henderson (Illustrator)
$13.95
Not available

Stone introduces Edwin, a young man who must discover his family's past if he is to have any future. Edwin learns of his ancestor Stone, a young Plains Cree man, who came of age in the early 19th century. Following a vision quest, Stone aspires to be like his older brother, Bear, a member of the Warrior Society. But when Bear is tragically killed during a Blackfoot raid, Stone, the best shot and rider in his encampment, must overcome his grief and avenge his brother's death. Only then can he begin a new life with his bride, Nahoway.

David A. Robertson is an award-winning writer. His books include When We Were Alone (winner Governor General's Literary Award), Will I See? (winner Manuela Dias Book Design and Illustration Award Graphic Novel Category), Betty, The Helen Betty Osborne Story (listed In The Margins), and the YA novel Strangers. David educates as well as entertains through his writings about Indigenous Peoples in Canada, reflecting their cultures, histories, communities, as well as illuminating many contemporary issues. David is a member of Norway House Cree Nation. He lives in Winnipeg. Scott Henderson has worked as an illustrator for comics, portraiture, and advertising art. He is author/illustrator of the sci-fi/fantasy comic, The Chronicles of Era and has illustrated two comics for the Canadian Air Force's For Valour series, the bestselling graphic novel series 7 Generations, selected titles from the Tales From Big Spirit series, and the graphic novels, Betty: The Helen Betty Osborne Story and Eisner-award nominee, A Blanket of Butterflies.