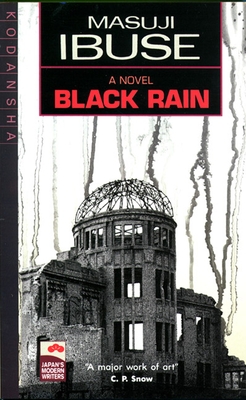 Black Rain is centered around the story of a young woman who was caught in the radioactive "black rain" that fell after the bombing of Hiroshima. lbuse bases his tale on real-life diaries and interviews with victims of the holocaust; the result is a book that is free from sentimentality yet manages to reveal the magnitude of the human suffering caused by the atom bomb. The life of Yasuko, on whom the black rain fell, is changed forever by periodic bouts of radiation sickness and the suspicion that her future children, too, may be affected.


lbuse tempers the horror of his subject with the gentle humor for which he is famous. His sensitivity to the complex web of emotions in a traditional community torn asunder by this historical event has made Black Rain one of the most acclaimed treatments of the Hiroshima story.

MASUJI IBUSE was born in Kamo, Hiroshima Prefecture, in 1898. He majored in French at Waseda University and joined the School of Fine Arts to pursue a serious interest in painting. His first story, "Salamander," was published in 1923, when Ibuse was still a student, and by the early 1930s his eloquent use of dialect and his unique prose style had established him as one of the leading figures in the Japanese literary world. In the years since 1938 he has been awarded almost every literary prize in Japan, and on the publication of Black Rain (1966) Ibuse was presented with both the Cultural Medal and Japan's highest literary award, the Noma Prize. Black Rain has been translated into eleven foreign languages.

"The most successful book yet written about the greatest single horror inflicted by one group of men upon another." —Sunday Times

"Immensely effective.... This is a book which must be read." —Books and Bookmen

"I would recommend Black Rain to every reader, even the squeamish." —Spectator

"Its subtle ironies and noble, unsentimental pity are a reminder of the strengths of Japanese fiction." —New Statesman