The Wages of Guilt: Memories of War in Germany and Japan (Paperback) 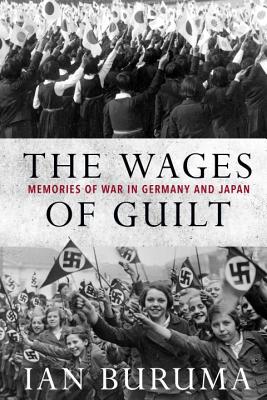 In this now classic book, internationally famed journalist Ian Buruma examines how Germany and Japan have attempted to come to terms with their conduct during World War II—a war that they aggressively began and humiliatingly lost, and in the course of which they committed monstrous war crimes. As he travels through both countries, to Berlin and Tokyo, Hiroshima and Auschwitz, he encounters people who are remarkably honest in confronting the past and others who astonish by their evasions of responsibility, some who wish to forget the past and others who wish to use it as a warning against the resurgence of militarism.

Buruma explores these contrasting responses to the war and the two countries’ very different ways of memorializing its atrocities, as well as the ways in which political movements, government policies, literature, and art have been shaped by its shadow. Today, seventy years after the end of the war, he finds that while the Germans have for the most part coped with the darkest period of their history, the Japanese remain haunted by historical controversies that should have been resolved long ago. Sensitive yet unsparing, complex and unsettling, this is a profound study of how people face up to or deny terrible legacies of guilt and shame.

Ian Buruma is the author of The Missionary and the Libertine: Love and War in East and West (1996), Murder in Amsterdam: The Death of Theo Van Gogh and the Limits of Tolerance (2006), Year Zero: A History of 1945 (2013), and Theater of Cruelty: Art, Film, and the Shadows of War (2014), winner of the PEN/Diamonstein-Spielvogel Award for the Art of the Essay. He is the Paul W. Williams Professor of Human Rights and Journalism at Bard and a regular contributor to The New York Review of Books, The New Yorker, and The New York Times, among other publications.

“The Wages of Guilt is subtitled Memories of War in Germany and Japan. But it is really far more, an exploration of the many and varied ways in which cataclysm has shaped national identity in our century.... The import of Mr. Buruma’s work is not limited to the losers of World War II. The very idea that a nation can and should be held accountable for its history, that a people can collectively experience remorse, guilt, or atonement, is one of our age.” —The New York Times Book Review

“It would be difficult to find anyone better suited than Ian Buruma to reflect upon the questions of why these national attitudes should be so different.... He is thoroughly familiar with the politics and culture of both Japan and Germany, has traveled widely in both countries, and speaks their languages fluently.”  —The New York Review of Books

“Will fascinate readers even as it recalls painful images.... [Buruma] is less interested in finding heroes and villains than in teasing out nuances of national character.”  —Chicago Tribune

“The Wages of Guilt augments [Buruma’s] body of cultural criticism with a brilliant lucidity that guides the reader through a thicket of varying responses to the historical black hole that has been deemed inconceivable.”  —The Boston Globe

“His knowledge of cultural and intellectual life is impressive.... This book reflects interestingly on why Japanese and German attitudes differ so remarkably.”  —The Economist

“Highlights the elusive nature of historical truth, which often takes a backseat to the myth-making needed to soothe the collective conscience.”  —Cleveland Plain Dealer

“A clear portrait of two peoples trying to come to terms with their own unspeakable behaviors.” —The Wall Street Journal

“This thought-provoking inquiry has a powerful theme: people must be held accountable for the society in which they live.” —Publishers Weekly

“As in God’s Dust (1989), Buruma takes a psychological and cultural voyage into nationalism, guilt, and self-delusion—in this case, of two of WWII’s defeated Axis powers...The book ranges wide and deep in its search for disparate voices in both [German and Japanese] societies: editors, intellectuals, writers, artists, activists. Buruma’s easy familiarity with Japan enables him to dig under the skin of national attitudes in a way that is rare for a Western commentator...All in all, a thoughtful, patiently assembled book that probes carefully and with moral toughness into precisely those painful truths.” —Kirkus Reviews