And There Was Light: The Extraordinary Memoir of a Blind Hero of the French Resistance in World War II (Paperback) 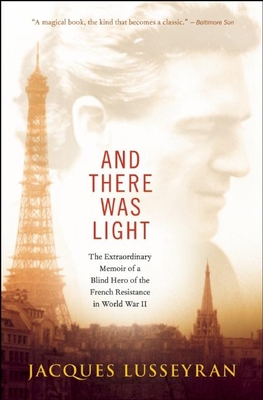 The book that helped inspire Anthony Doerr's All the Light We Cannot See An updated edition of this classic World War II memoir, chosen as one of the 100 Best Spiritual Books of the Twentieth Century, with a new photo insert and restored passages from the original French edition When Jacques Lusseyran was an eight-year-old Parisian schoolboy, he was blinded in an accident. He finished his schooling determined to participate in the world around him. In 1941, when he was seventeen, that world was Nazi-occupied France. Lusseyran formed a resistance group with fifty-two boys and used his heightened senses to recruit the best. Eventually, Lusseyran was arrested and sent to the Buchenwald concentration camp in a transport of two thousand resistance fighters. He was one of only thirty from the transport to survive. His gripping story is one of the most powerful and insightful descriptions of living and thriving with blindness, or indeed any challenge, ever published.

Jacques Lusseyran (1924-1971) became a professor in the United States at Case Western Reserve University after World War II. He died in a car accident in France.

A magical book, the kind that becomes a classic.”
— Baltimore Sun

One of the most powerful memoirs I’ve ever encountered...[Lusseyran’s] experience is thrilling, horrible, honest, spiritually profound, and utterly full of joy.”
— Ethan Hawke, in the Village Voice

One of the most extraordinary books I have ever read. It is why books are published at all.”
— Mark Nepo, author of Seven Thousand Ways to Listen

Lusseyran allows us to glimpse both heaven and hell on Earth through the eyes of a man who has lived through both. His description of what it is like to see’ as a blind man is fascinating and inspiring; his account of Buchenwald, where he was condemned to the living hell of the Invalids’ Barracks,’ is one of the most anguishing fragments of Holocaust testimony that I have ever encountered.”
— Jonathan Kirsch, Los Angeles Times

A stunning revelation of human courage and love arising in the midst of implacable human evil. Under it all runs a deep current of mystical truth and hope.”
— Jacob Needleman, author of An Unknown World

An exciting, inspirational account of a life without sight.”
— Library Journal

What normally would seem a tragic plunge into darkness becomes a thrilling journey into light.”
— Peter Brook, director of the International Centre for Theatre Research, Paris

This book is his testament to the joy which exists in all of us, a joy which no conditions — not even the worst — can kill.”
— Roshi Philip Kapleau, author of The Three Pillars of Zen