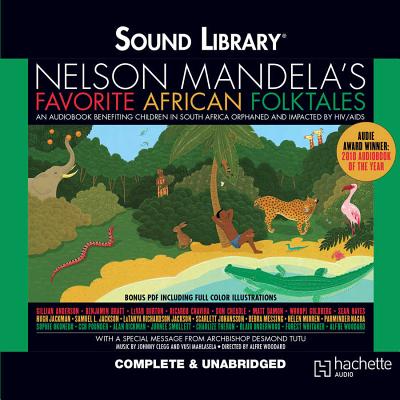 Nelson Mandela's Favorite African Folktales is a landmark work that gathers in one volume many of Africa's most cherished folktales. Mandela, a Nobel Laureate for Peace, has selected these thirty-two tales with the specific hope that Africa's oldest stories, as well as a few new ones, be perpetuated by future generations and be appreciated by people throughout the world.

Winner of the prestigious Audie Award for 2010 Best Audiobook of the Year, this audiobook is performed by a diverse group of acclaimed actors and others who donated their time and talents to help South African children orphaned and impacted by HIV/AIDS.

Along with a stellar list of celebrity readers, this recording includes a special message from Archbishop Desmond Tutu, music by Johnny Clegg and Vusi Mahlasela, and creative direction by Alfre Woodard.

The stories include classic morality tales, creation myths, and more, tales that are light and wondrous enough for children while being deep enough for adults. Translated chiefly in the nineteenth and twentieth centuries into English and other European languages from their original languages-be they Karanga, Nguni, Xhosa, or others-these folktales are a testament to the craft of storytelling and the power of myth.

The actors, creative director, engineers, graphic designers, attorneys, and recording studios fully donated their services, as did three-time Grammy winner Gavin Lurssen, who mastered the audiobook. Proceeds benefit both the Nelson Mandela Children's Fund, a South African organization founded in 1995, and ANSA, which works in the United States and South Africa to combat HIV/AIDS.