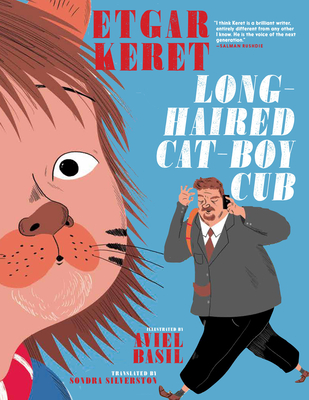 What happens when a tired boy with a fertile imagination is left to fend for himself at the zoo? Well, if his father is too busy to play and must talk business on his phone, and it's close to naptime, then ... a lot. After freeing sad animals from their cages, the boy takes a ride in an airship with an old turtle and a lazy rhinoceros. Once on board he describes to Habakkuk, the ship's captain, the traits of the rarely seen long-haired cat-boy cub: Long-haired cat-boy cubs need to be played with once an hour to stay alive. Also, you cannot wash a long-haired cat-boy cub in water, they only like to drink juice and chocolate milk, and, most of all, you must listen to a long-haired cat-boy cub's story to the end even if you get a call from work.

Long-Haired Cat-Boy Cub is a clever and captivating tale that will appeal to any cub who has busy parents and a busier imagination.

Born in Tel Aviv in 1967, ETGAR KERET is a leading voice in Israeli literature and cinema. He is the author, most recently, of the memoir The Seven Good Years, as well as five bestselling story collections, which have been translated into more than 40 languages. His work has appeared in The New York Times, Le Monde, The Guardian, The New Yorker, and The Paris Review, among other publications, and on This American Life, where he is a regular contributor. He has also written a number of screenplays, and Jellyfish, his first film as a director alongside his wife Shira Geffen, won the Caméra d'Or prize for best first feature at Cannes in 2007. In 2010 he was named a Chevalier of France's Ordre des Arts et des Lettres. Most recently, he received the 2016 Charles Bronfman Prize and, for the Italian edition of The Seven Good Years, the Premio Letterario Adei-Wizo.

AVIEL BASIL graduated from Shenkar College of Engineering and Design in 2011 and won the Israel Museum Award (silver medal) for his illustrations in 2012.

SONDRA SILVERSTON has translated the work of Israeli fiction writers such as Etgar Keret, Savyon Liebrecht, and Aharon Megged. Her translation of Amos Oz's Between Friends won the National Jewish Book Award for Fiction in 2013. Born in the United States, she has lived in Israel since 1970.

"When your youngster tugs at your office shirt sleeve and says 'look dad, read this', you'd do well to take that advice.... charming, clever, obvious, intelligent and witty." --The Bookbag (UK)