Yea Though I Walk (Paperback) 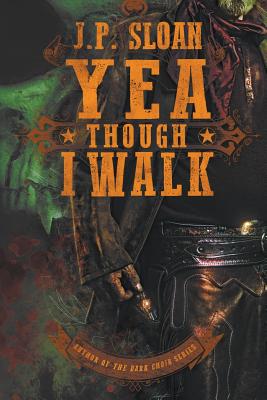 "Never leave a devil without puttin' it in the dirt." First Law of the Godpistols. Gunning down the heathen monsters of the untamed West is the calling of the Godpistols, and may be Linthicum Odell's only path to redemption. A Union Army deserter, Odell figures he has plenty of sin to atone for. As he has yet to earn the Godpistols' trust, they send Odell on a thankless errand to Gold Vein, a mining town with two afflictions: a corrupt local justice named Lars Richterman, and a horde of cannibal wendigo in the surrounding hills. Half-dead from a wendigo attack, Odell is nursed back to life by Denton Folger, a righteous press man from the East Coast. Intent on settling debts, Odell takes up Folger's cause against Richterman and his schemes on the land surrounding Gold Vein. Odell soon realizes that Richterman and the wendigo in the hills are not the only monsters threatening the town. His greatest ally comes in the form of Folger's ferociously capable wife, Katherina, who holds the secrets to the intrigues of this valley. To save Gold Vein, Odell must pry loose these secrets, though her dark allure may prove too much for Odell's loyalties... both to his Godpistol dogma and to Folger. When Odell discovers the truth of what brought him to this valley, and why Katherina keeps this truth buried, will his virtue fail? Or will a bag of silver bullets be enough to survive this war between devils, virtue be damned?