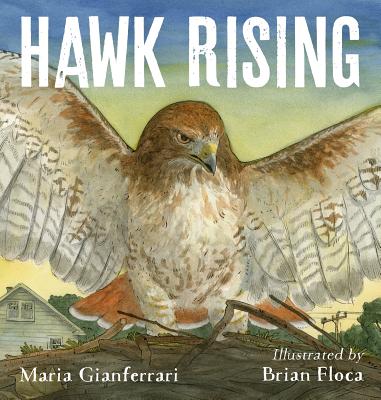 Early morning and a ruffle of feathers,

A shadow gliding through the backyard.

High above your house Father Hawk circles, sharp eyes searching for prey. From the front porch, you watch.

The sun sets low in the sky.

A father red-tailed hawk hunts prey for his family in a suburban neighborhood in this thrilling, fierce, and gorgeous nonfiction picture book, Hawk Rising, illustrated by Caldecott medalist Brian Floca.

Maria Gianferrari lives in northern Virginia with her scientist husband, artist daughter, and rescue pets, Becca the dog and Lucia the rat. Bobcat Prowling is her fourth book for Roaring Brook Press and a companion to Coyote Moon and Hawk Rising.

Brian Floca was born and raised in Temple, Texas. He attended college at Brown University, where he double majored in art and history, cartooned for the school newspaper, and took classes down College Hill at the Rhode Island School of Design.
One of his instructors at RISD was author and illustrator David Macaulay, who introduced him to author Avi. That led to a collaboration with Avi and editor Richard Jackson on the graphic novel City of Light, City of Dark. From there, he went on to illustrate additional stories by Avi and other authors, to continue studying art (including an MFA from the School of Visual Arts in New York), and to write and illustrate books of his own.

Brian's books include Moonshot: The Flight of Apollo 11, Avi's Poppy and Ereth, Patricia MacLachlan's The True Gift, and, Ballet For Martha, a picture book by Jan Greenberg and Sandra Jordan. He's working now on his next book as author and illustrator. He lives in Brooklyn, New York.

"Gianferrari’s poetic text layers lyrical beauty onto a harsh story of survival, and Floca’s luminous scenes convey both honest objectivity—the terrified squirrel racing under the hawk’s shadow and then gripped in its claws—and genuine sensitivity in the parent hawks’ care for their chicks."—Bulletin of the Center for Children's Books