My Country: A Syrian Memoir (Hardcover) 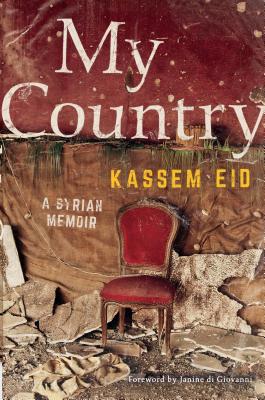 Kassem Eid survived arrest in al-Assad’s regime, a chemical weapons attack that shocked the world, and the siege of a city where he fought with the Syrian rebel army. This is his story—a unique and powerfully moving testimony for our times, with a foreword by Janine di Giovanni.

On August 21, 2013, Kassem Eid nearly died in a sarin gas attack in the town of Moadamiya. At least 1,500 people were killed. Later that day, he was hit by a mortar while helping the Free Syrian Army fight government forces. He survived that, too. But his entire world—friends, neighbors, family, everything he knew—had been devastated beyond repair.

Eid recalls moving to Moadamiya in 1989, at the age of three. The streets where he and his eleven siblings played were fragrant with jasmine. But he soon realized that he was treated differently at school because of his family's Palestinian immigrant origins, and their resistance to the brutal regime. When Bashar al-Assad succeeded his father in 2000, hopes that he would ease the state's severity were swiftly crushed.

The unprecedented scope of this brave, deeply felt memoir makes it unique in the body of literature to emerge from the Syrian civil war. Eid illuminates the realities of growing up in a corrupt dictatorship; the strictures of living under siege; the impact of unspeakable violence; and how, at extraordinary personal risk, he drew worldwide attention to the assault on cities across Syria. This is a searing account of oppression, war, grit, and escape, and a heartbreaking love letter to a world lost forever.

Kassem Eid is a Palestinian-Syrian rebel and human rights activist. In 2014 he testified before the United Nations Security Council. He has contributed to the New York Times, Washington Post, and the Wall Street Journal, and was interviewed on 60 Minutes. He is currently a refugee living in Europe.

"At last, here is the first wave of books written by Syrians not about their escape to Europe as refugees from the war but about their lives inside the country . . . What emerges is a remarkably unified picture of the realities of life since 1970 in the Syria of the Assads . . . shows, unambiguously, precisely what the Assad government seek to conceal." - Times Literary Supplement

"An account of oppression, war, survival and escape as the world ignored what was going on. A touching tale, this humanizes the story of war when often all we want to do is look away." - Metro

"Eid's page-turning memoir is, above all, a deeply personal tale of survival . . . Gripping, hauntingly raw, and a testament to his resilience." - Maryam Saleh, author of THE INTERCEPT