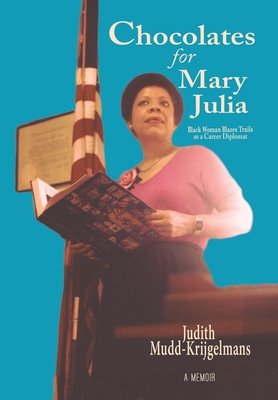 Following of on bee coming-of-age story in Flowers for Brother Mudd,
JUDITH RETURNS TO NEW DELHI
as a US diplomat, her lively five-year old daughter at her side. Embarking on the life she's dreamed of, this former English major and Fulbright scholar who's just earned a Master's in international service from American University throws herself into living the globe-trotting life. What lies in store for this risk-taker who grew up during Jim Crow is what Chocolates for Mary Julia is about. After riding the stormy waves of the Civil Rights Movement and witnessing monumental legal changes for blacks, she entered the foreign service expecting to serve on behalf of an America that had finally assured the right to the pursuit of happiness for all, only to realize that there was much more to do. Nonetheless, she would not be robbed of a fulfilling career. As the velvety sweetness of her mother, Mary Julia's, dreams hoisted her on her way, she embarks on tours abroad, and in Washington, DC. Determined to succeed, she thrives on living in faraway places while overcoming high hurdles, making it a point to savor as much of the good life as she can. Doing work that makes a difference, on a level of excellence inspired by the Ursuline Sisters and historically black Morgan State University, often in the face of racial bias, she persists in having a full life: Never giving up on love, building family and effective work teams, seeing world sights-all while, paradoxically, proudly waving the flag for an ideal America yet to be realized.