The Treasure of the Black Swan (Hardcover) 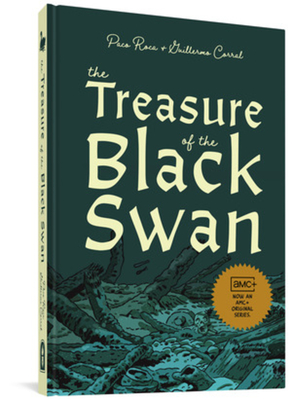 This thrilling graphic novel, based on real events and which has been adapted into an AMC Plus miniseries (La Fortuna) starring Stanley Tucci, chronicles the intense legal and political battles sparked by the discovery of a priceless shipwreck.

May 2007. When an American treasure-hunting company uncovers a shipwreck containing the greatest underwater trove ever found, the world is captivated by their discovery. But over in Spain, a group of low-level government officials surmises that the sunken ship is in fact an ancient Spanish vessel. Thus begins a legal and political thriller, pitting a group of idealistic diplomats against a rich and powerfully connected treasure hunter, in which vital cultural artifacts and hundreds of millions of dollars hang in the balance.

Cartoonist Paco Roca and writer Guillermo Corral bring a cinematic flair to this graphic novel, combining threads of Tintin-inspired seafaring adventure, political intrigue, tense courtroom drama, and, in the midst of it all, a budding romance. A gripping dramatization of a little-known, unbelievable true story of money, political power, and cultural heritage.

The Treasure of the Black Swan was adapted into an original television series, La Fortuna, starring Stanley Tucci and debuted in the US on AMC Plus in January 2022.

Paco Roca (Francisco Martínez Roca) is a graphic artist and a cartoonist from Valencia, Spain, who has won several art/writing awards. His graphic novel Wrinkles has been adapted into an animated movie.

Guillermo Corral has worked as a career diplomat since 1997. His career highlights include serving as general director of cultural policy and industries and as cultural attaché in Spain’s embassies in Washington, DC, and Havana, Cuba. He has published a collection of short stories, Mientras crece el bosque, as well as numerous stories in journals such as Granta, Sibila, and Librújula. The Treasure of the Black Swan, a work of fiction based on real events that he witnessed firsthand, marks his debut as a comic book writer.

Andrea Rosenberg is a translator who has worked on a variety of novels and graphic narratives in Spanish and Portuguese. Her translations of the graphic novels Run For It by Marcelo D’Salete and The House by Paco Roca won Eisner Awards in 2018 and 2020, respectively.

A gripping account of one of the most dramatic cases of [writer Corral's diplomatic] career. Artist Roca's charming, Tintin-influenced artwork finds the drama and humanity in even the most mundane of clerical duties.

Based on actual events, the story is enthralling and will be attractive to fans of legal thrillers.
— Booklist