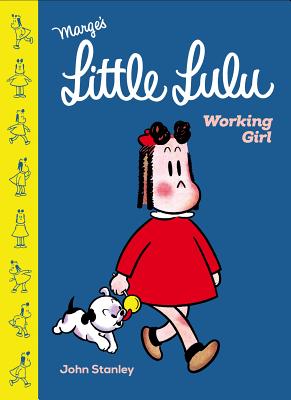 The first in a five-volume best-of series, featuring an introduction from Margaret Atwood!

Lulu Moppet is an outspoken and brazen young girl who doesn’t follow any rules—whether they’ve been set by her parents, the neighborhood boys, or society itself. In 2019 D+Q begins a landmark full-color reissue series collecting five volumes of Lulu’s funniest suburban hijinks: she goes on picnics, babysits, and attempts to break into the boys’ clubhouse again and again. Cartoonist John Stanley’s expert timing and constant gags made these stories unbelievably enjoyable, ensuring that Marge’s Little Lulu was a defining comic of the post-war period.

First released in the 1940s and 1950s as Dell comics, Little Lulu as helmed by Stanley remains one of the most entertaining works in the medium. In this first volume, Little Lulu: Working Girl, we meet the series’ mainstay characters: Lulu, Tubby, Alvin, and oodles more neighbourhood kids. Little Lulu’s comedy lies in the hilarious dynamic between its cast of characters.

Lulu’s assertiveness, individuality, and creativity is empowering to witness—the series is powerfully feminist despite the decades in which the stories were created. It’s the character’s strong personality that made her beloved by such feminist icons as Patti Smith, Eileen Myles, and more. Lovingly restored to its original full color, complete with knee-slapping humor and an introduction by Margaret Atwood that explains the vitality of Lulu herself, Little Lulu: Working Girl is a delight for classic comics fans and the uninitiated.

John Stanley was a journeyman comics scripter from the 1940s through the 1960s. He's most famous for his 14-year run on the Little Lulu comics published by Dell. He is considered by many comics historians to be the most consistently funny and idiosyncratic writer to ever work in comics. During his comics career he also wrote original scripts for the licensed characters Nancy and Sluggo, Tubby, Woody Woodpecker, Deputy Dawg, Clyde Crashcup, Choo Choo Charlie, Raggedy Ann and Andy, Oswald the Rabbit, Andy Panda, Krazy Kat, Alvin and the Chipmunks, and Nellie the Nurse.
Toward the end of his career, Stanley launched a series of teen-centric comics—Thirteen Going on Eighteen, Around the Block with Dunc and Loo, and Kookie—as well as his comical 1960s monster craze sendup, Melvin Monster. He left comics over a reprint royalty dispute sometime in the late 1960s never to return. He died in 1993.

“Little Lulu’s presence on the comics page meant that millions habitually read the adventures of a young girl who consistently bested —outsmarted, outplayed and outmaneuvered— boys.”—NPR

“When Stanley started crafting [Little Lulu] the stories blossomed into biting, laugh-out-loud sitcoms, with Lulu a feminist hero for the ages.”—Vulture