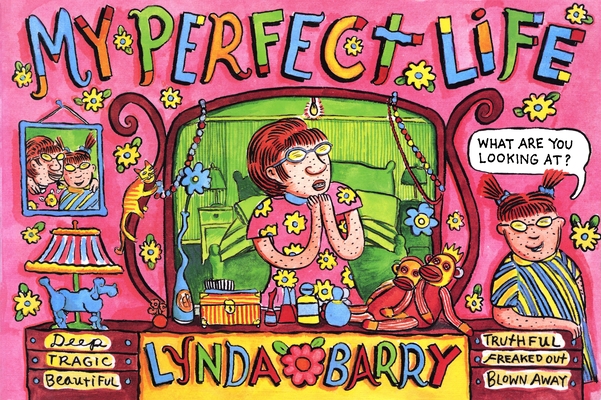 Maybonne and Marlys Mullen endure the mortifying highs and lows of middle school in this Lynda Barry classic.

Collected from the strip Ernie Pook’s Comeek, which was serialized in alternative weeklies across the continent, My Perfect Life captures the moment when Lynda Barry finds the perfect balance in longer-form storytelling between the bellyaching laughs and the brutal reality checks. Along with the 2022 release Come Over Come Over, this collection continues to spotlight the life of teenager Maybonne Mullen. She suffers through the utterly relatable insults of junior high and the excruciating embarrassment caused by her little sister, Marlys. Hovering in the background, however, is a broken home, parents struggling with addiction, a grandmother who takes her granddaughters from the diverse big city to a bewilderingly bland small town.

Yet fitting into the new school and surroundings is, of course, paramount to a young teenager. Maybonne begins September full of life and excitement. As the school year progresses, she experiences bullying, her first boyfriend, family drama, drinking, and more. The book ends with Maybonne withdrawn and jaded as the reality of her world outweighs the magic.

Lynda Barry has worked as a painter, cartoonist, writer, illustrator, playwright, editor, commentator, and teacher and found that they are very much alike. She lives in Wisconsin, where she is a professor of Interdisciplinary Creativity at the University of Wisconsin-Madison.

Barry is the inimitable creator behind the seminal comic strip that was syndicated across North America in alternative weeklies for two decades, Ernie Pook's Comeek, featuring the incomparable Marlys and Freddy. She is the author of The Freddie Stories, One! Hundred! Demons!, The! Greatest! of! Marlys!, Cruddy: An Illustrated Novel, Naked Ladies! Naked Ladies! Naked Ladies!, and The Good Times are Killing Me, which was adapted as an off-Broadway play and won the Washington State Governor's Award.

She has written three bestselling and acclaimed creative how-to graphic novels for Drawn & Quarterly, What It Is which won the Eisner Award for Best Reality Based Graphic Novel and R.R. Donnelly Award for highest literary achievement by a Wisconsin author; Picture This; and Syllabus: Notes From an Accidental Professor, and In 2019 she received a MacArthur Genius Grant. Barry was born in Wisconsin in 1956.