Autocannon: A History of Automatic Cannon and their Ammunition (Hardcover) 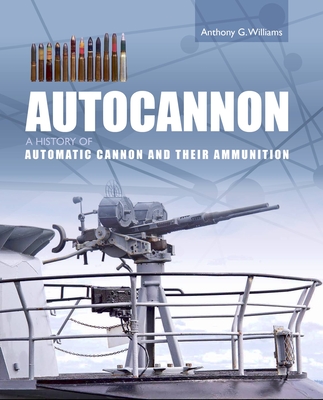 Autocannon is a comprehensive history of the development of automatic cannon and their ammunition from the end of the nineteenth century up to the present day.

Defined as fast-firing high-velocity automatic guns with calibres between 20mm and about 57mm, have been an integral part of the world’s militaries for well over a century. A brief history of their development is given, followed by sections examining the basic principles of gun and ammunition design, including various unconventional systems. Next comes a survey of cartridges in calibre order, from 20mm to 57mm, including not only ammunition that has seen service, but also a wide range of experimental types. Finally there is a survey of the cannon, grouped by nationality, which again includes many experimental models.

The book includes data on about 200 different cartridges and 400 cannon, and has nearly 500 illustrations. It is the culmination of decades of research, and is unmatched in its coverage of this subject.

Anthony G. Williams is an ammunition specialist. He was an editor of Jane's Weapons: Ammunition for thirteen years, contemporaneously with being editor of The Cartridge Researcher, the journal of the European Cartridge Research Association, for over fifteen years, thereby covering both the modern and historic aspects of ammunition. He is the author Rapid Fire, Assault Rifle [with Maxim Popenker] and the Flying Guns trilogy [with Dr Emmanuel Gustin], which describes the development of aircraft guns, ammunition and installations from 1914 to the present day. For more than a decade he has made numerous presentations on aspects of military ammunition to international conferences such as the annual symposia held at the Ministry of Defence Academy at Shrivenham and the National Defence Industries Association conferences in the USA, and he maintains a military gun and ammunition website at quarryhs.co.uk