Music of the Night: from the Crime Writers' Association (Paperback) 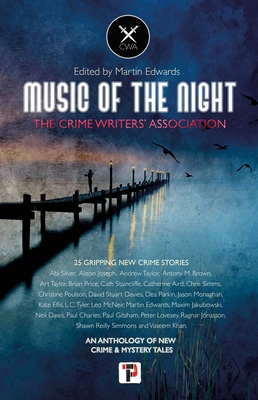 The Annual Crime Writers' Association anthology is always a thrilling read, and eagerly anticipated by readers and authors of crime and mystery fiction worldwide.

Music of the Night is a new anthology of original short stories contributed by Crime Writers' Association (CWA) members and edited by Martin Edwards, with music as the connecting theme. The aim, as always, is to produce a book which is representative both of the genre and the membership of the world’s premier crime writing association.

The CWA has published anthologies of members’ stories in most years since 1956, with Martin Edwards as editor for over 25 years, during which time the anthologies have yielded many award-winning and nominated stories by writers such as Ian Rankin, Reginald Hill, Lawrence Block, and Edward D. Hoch. Stories by long-standing authors and stellar names sit alongside contributions from relative newcomers, authors from overseas, and members whose work haven’t appeared in a CWA anthology before.

Art Taylor – Love Me or Leave Me

Brian Price – The Scent of an Ending

Christine Poulson – Some Other Dracula

Dea Parkin – The Sound and the Fury

Kate Ellis – Not a Note

Paul Charles – The Ghosts of Peace

Peter Lovesey – And the Band Played On

FLAME TREE PRESS is the imprint of long-standing independent Flame Tree Publishing, dedicated to full-length original fiction in the horror and

Martin Edwards (Editor) is the author of eighteen novels, including the Lake District Mysteries, and the Harry Devlin series. His ground-breaking genre study The Golden Age of Murder has won the Edgar, Agatha, and H.R.F. Keating awards. He has edited twenty eight crime anthologies, has won the CWA Short Story Dagger and the CWA Margery Allingham Prize, and is series consultant for the British Library’s Crime Classics. In 2015, he was elected eighth President of the Detection Club, an office previously held by G.K. Chesterton, Agatha Christie, and Dorothy L. Sayers.

The CWA (Crime Writers' Association) was founded in 1953 by John Creasey, and organises the prestigious CWA Dagger Awards which celebrate the best in crime writing. The CWA is a pro-active, thriving and ever-expanding community of writers based in the UK but with a reach that extends worldwide.

'For more than sixty years, the CWA has done more for British crime writing than any other organisation.'
— Andrew Taylor, award-winning author of The American Boy and recipient of the 2009 CWA Diamond Dagger

"A superb collection in a variety of styles which just shows how many different stories some of crime writing’s finest can produce from the simple theme of music and murder. Highly recommended."
— - PromotingCrime