The Dark Side of News Fixing: The Culture and Political Economy of Global Media in Pakistan and Afghanistan (Anthem Global Media and Communication Studies) (Hardcover) 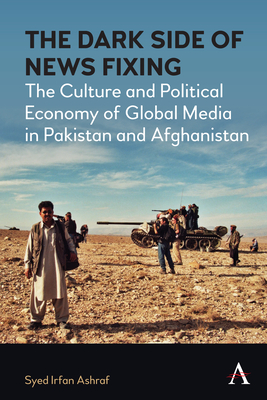 The book argues that the definition of a "fixer" emerges when local journalists are de-professionalized and their field expertise and connections are stripped away to produce a faceless, nameless, set of "eyes and ears" in service of the 24/7 media machine. The fact that we have the same news 24/7 across a range of news channels is an outcome of the simultaneous process of centralized decentralization--media conglomerates controlling news distribution and exhibition by hiring a scattering of fixers to do the groundwork of global news production. But working as a daily wager in journalism is not about risks taken or the self-exploitation endured. Rather, the role is an attack on the basics of the profession itself, the basic dignity of the journalist as an upholder of democracy. A fixer, who must be the eyes and ears of the people against forces of status quo, is reduced to a role and given as an instrument in regular journalists' hands to be used as a resource. Challenging existing literature on the topic, the book reveals the tension between actual local reporters and the role (read fixer) they are hired to fill. The book argues that fixer as a role emerges in tandem with news practices that leads to decontextualizing local events, people and stories to fit the consumption patterns of market economy, a colonial practice resurging in contemporary capitalism.

The book holds not just the hierarchies in journalism responsible for feeding the dark underbelly of global news production, but also identifies the field inequality that produces violence against those local reporters. The issue is a quite serious challenge. Offering on-the-ground view of the situation from local perspectives, the book examines the consequences of the political economy of corporate media, and the price journalists pay for diminishing the life expectations as well as intellectual labor of journalists working as "fixers."

This book is unique in that it studies fixers not as a role but rather as a political position, objective condition and subjective experience. Theorizing on the emergence of the fixer as an outcome of colonial capitalism, the book brings Marx, himself a journalist, back into the twenty-first century discourse--taking discussions of intellectual labor back to the origins of capitalism--revealing how structural inequality takes a toll on journalism as a profession. As U.S. Senator Hiram Warren Johnson once declared that the first casualty of war was truth, the book suggests that the sacrifice of truth has become a routine, both in liberal democracies and in the war-torn Global South. The first casualty, in this reckoning, is not truth itself, but the bearers of truth, i.e., journalists, many of whom now find themselves reduced to the category of fixers.

Irfan Ashraf has a PhD in mass communication and media arts (MCMA) from the Southern Illinois University, Carbondale and is an assistant professor at the Department of Journalism and Mass Communication, University of Peshawar, Pakistan.