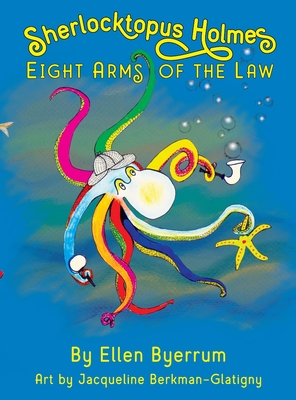 Sherlocktopus Holmes, the smartest octopus in the ocean, teams up with savvy starfish Dr. Flotsam to seek young Sally's missing doll, thrown into the water by her naughty brother Steven. Complications arise when the doll is stolen by a succession of mysterious sea creatures, an otter, an eel, and a squid.

Following clues, Holmes and Flotsam swim through the Shark Park, the seahorse races and other dark places, in search of the doll, but not before encountering a red herring offered by the devious squid known as Squid Pro Quo.

Told with clever rhymes and in meter, this children's picture book also includes amusing definitions that rhyme, such as:

A herring is a fish that's silver or blue.

A herring that's red can never be true.

Don't chase a red herring, it's an untrue clue

Children ages six to ten and older will enjoy this colorful, imaginative trip through the sea with Sherlocktopus Holmes.