The Peacock and the Sparrow: A Novel (Hardcover) 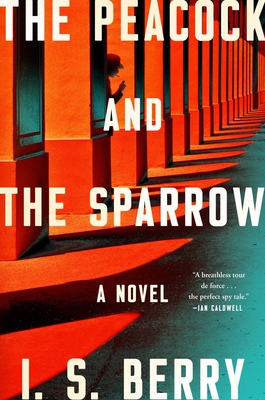 During the Arab Spring, an American spy’s final mission goes dangerously awry in this explosive and eerily realistic espionage debut from a former CIA officer that is perfect for fans of Daniel Silva, Alan Furst, and John LeCarre.

Shane Collins, a world-weary CIA spy, is ready to come in from the cold. Stationed in Bahrain off the coast of Saudi Arabia for his final tour, he’s anxious to dispense with his mission—uncovering Iranian support for the insurgency against the monarchy. But then he meets Almaisa, a beautiful and enigmatic artist, and his eyes are opened to a side of Bahrain most expats never experience.

When his trusted informant becomes involved with a murder, Collins finds his growing romance with Almaisa and Bahrain upended. In an instant he’s caught in the crosshairs of a revolution. Now he must rely on his skills to navigate a bloody uprising, win Almaisa’s love, and uncover the blurred lines between the dark secrets of both Bahrain and the United States.

“A breathless tour-de-force, the perfect spy tale” (Ian Caldwell, author of The Fifth Gospel) and dripping with authenticity, The Peacock and the Sparrow is a timely story of the elusiveness of truth, the power of love and belief, and the universal human desire to be part of a cause greater than yourself.

I.S. Berry spent six years as an operations officer for the CIA, serving in wartime Baghdad and elsewhere. She has lived and worked throughout Europe and the Middle East, including two years in Bahrain during the Arab Spring. She is a graduate of the University of Virginia School of Law and Haverford College. Raised in the suburbs of Washington, DC, she lives in Virginia with her husband and son.

“Not since The Spy Who Came in from the Cold has there been such a riveting and thought-provoking story of international espionage.  In the tradition of John le Carre and Graham Greene, former spy Berry has woven a twisted, richly evocative tale—one that plunges the reader into the depths of the Arab Spring and the blackest recesses of human nature.  A breathless tour-de-force that smuggles the reader form the souks of Bahrain to the simmering streets of Phnom Penh, Berry’s debut delivers the perfect spy tale.” —Ian Caldwell, New York Times bestselling author of The Fifth Gospel