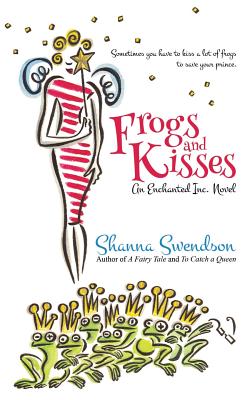 This is book number 8 in the Enchanted series.

Book 8 in the Enchanted, Inc. SeriesThe weather is getting cold, but the frog population in New York is on the rise, thanks to a magical mafia that has a unique method for getting their enemies out of the way. When wizard Owen Palmer at Magic, Spells, and Illusions, Inc., gets a cryptic threat that the secretive organization called the Collegium is gunning for them, Katie Chandler puts their wedding on hold and goes undercover as a compromised magical immune to infiltrate the enemy.It's not easy pretending to work for a psycho who not only wants to take over MSI but also pull a coup in his own organization. It's even more difficult having to pretend to cut all ties with MSI. But with prominent magical citizens disappearing and anyone who crosses the magical mafioso landing on a lily pad, Katie knows she doesn't have a choice. It becomes personal when her friends become targets. It becomes an urgent crusade when Owen disappears.When the final showdown comes, Katie's going to have to kiss a lot of frogs to have the allies she needs to save MSI - and if she ever wants to see her fianc again.

Shanna Swendson earned a journalism degree from the University of Texas and used to work in public relations but decided it was more fun to make up the people she wrote about, so now she's a full-time novelist. She's the author of the contemporary fantasy Enchanted, Inc. series and Fairy Tale series and the young adult steampunk fantasy Rebel Mechanics, which was named one of VOYA's best science fiction, fantasy, and horror titles of the year and which has been included on the Lone Star Reading List by the Texas Library Association. She's also contributed essays to a number of books on pop culture topics. She's a frequent guest at writing conferences and science fiction conventions, where she gets to talk about books and television and consider it "work." When she's not writing, she's usually discussing books and television on the Internet, singing in or directing choirs, knitting, taking ballet classes, or attempting to learn Italian cooking. She lives in Irving, Texas, with several hardy houseplants and too many books to fit on the shelves.