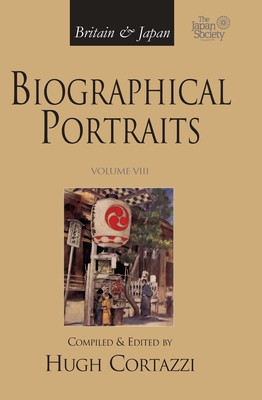 This is book number 8 in the Britain and Japan series.

This is the eighth and largest volume in the series Britain & Japan: Biographical Portraits published on behalf of The Japan Society, London. It contains essays from forty contributors relating to fifty-two portraits of personalities who have been influential in political, official and cultural relations between the two countries from the time of the Meiji Restoration to the present day.

Hugh Cortazzi, GCMG, was British Ambassador to Japan 1980-1984 and Chairman of The Japan Society, London, 1985-1995. He has written extensively on Japan. His many books include Isles of Gold: Antique Maps of Japan (1983), The Japanese Achievement (1990), his memoir Japan and Back and Places Elsewhere (1998). This is the fifth volume of Britain & Japan: Biographical Portraits he has compiled and edited for The Japan Society, in addition to Japan Experiences: Fifty Years, One Hundred Views (2001) and British Envoys in Japan, 1859-1972.